Malaria is an infection caused by mosquito bites, common in Africa, Asia and South America. Over 220 million people are infected with malaria annually according to the WHO reports with the majority of it among the really poor communities with little assess to proper health care. 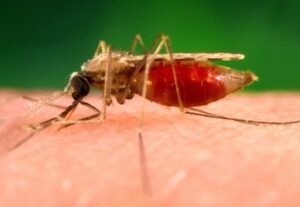 Malaria is a mosquito-borne parasitic disease, transmitted by mosquito bites and may be dangerous or life-threatening. Requires laboratory tests and treatable by medical professionals.

Malaria can occur when a person is bitten by an infected anopheles mosquito. mosquitos are mostly carriers of the plasmodium parasite, this parasite when transmitted into a person go into the bloodstream and then the liver where they multiply for between two to four days after which they go back into the blood and attack the red blood cells.

The major way people get infected with the malaria parasite is through mosquito bites, there are four types of parasites that cause malaria; plasmodium falciparum, P. ovale, P. malariae, P. vivax. Although the P. falciparum parasite is most deadly and common in Africa.

Who can get Malaria?

Anyone can be infected with malaria, especially people living in the tropical regions of the world. Malaria is common in Africa, Asia, South America, the Caribbean and mainly tropical regions. The majority of those at risk of complications from malaria are children and pregnant women.

What Are the Symptoms of Malaria?

Sometimes, people infected with malaria may suffer several symptoms within short intervals ranging from cold/chills to high fever and sweating and back to normal temperature. This is sometimes referred to as malaria attacks.

Can Malaria be transmitted?

How is Malaria Diagnosed?

The Doctor examines the Patients for the symptoms and a blood test is carried out. The test, if done properly would show the following;

Agape biomedical Clinic is equipped with a standard laboratory for effective testing and diagnosis of different kinds of ailments including Malaria. Our caregivers are well trained to take care of you till you get back on your feet.

How Is Malaria Treated?

To treat malaria, the doctor would prescribe drugs that would kill the malaria parasite. Some of the drugs used to treat malaria includes;

How can Malaria be prevented?